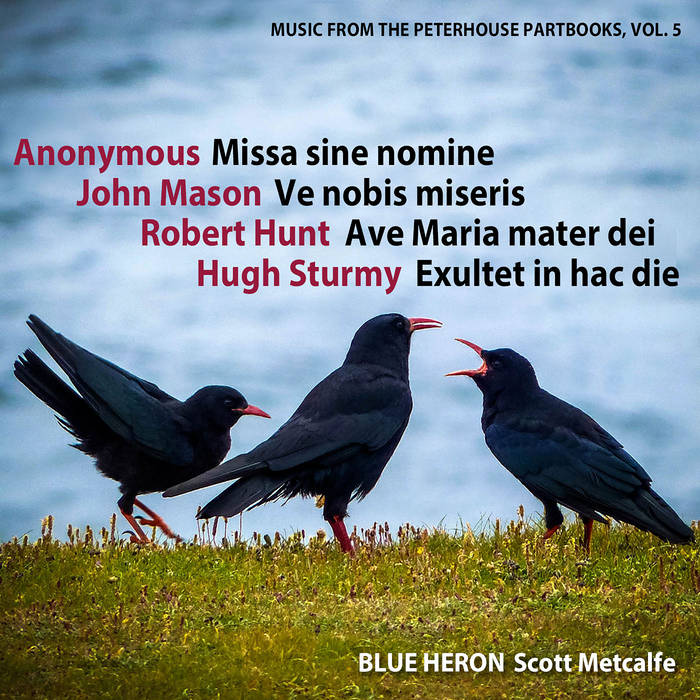 Music from the Peterhouse Partbooks, vol. 5

Winner of the 2018 Gramophone Classical Music Award for Early Music

"One of the discoveries of the year" - Fabrice Fitch, Gramophone, Oct. 2017

Volume 5 of the acclaimed series, Music from the Peterhouse Partbooks, brought Blue Heron the honor being named (in 2018) the first non-European winners in the Early Music category in the 41-year history of the Gramophone Classical Music Awards, having been previously recognized as a Critic's Choice and an Editor's Choice by Gramophone Magazine, the leading Classical music publication in the world. The Gramophone awards (sometimes called the "British Grammys") are the most important classical music awards in the world.

The disc contains the world premiere recording of a Mass by an anonymous English composer from the first half of the 16th century. Since the source of the cantus firmus has not been identified, the Mass remains without a name ("sine nomine"). The disc also includes an antiphon addressed to St. Augustine of Canterbury which is the only surviving work of Hugh Sturmy, a short and dramatic Ave Maria mater dei by Robert Hunt, whose Stabat mater is a highlight of vol. 3 of the series, and the sonorous and captivating Ve nobis miseris by John Mason, for men's voices in five parts. This recording is part of a 5-CD project which began in 2010.

The marvellous series "Music From The Peterhouse Partbooks" ends very much on a high note… It's the Anonymous Missa sine nomine that stands out here; talk about poor branding! After being ignored for centuries, this piece comes to life in this recording, grabs you and forces you to pay attention. It's obviously engaged the singers, who provide an outstanding example of power and precision in choral singing. … In the entire 5-CD series Blue Heron brings these five hundred year old stories alive, here in the 21st century. It's a remarkable achievement.
Dean Frey, Music for Several Instruments (blog)

Our understanding of English music from the early sixteenth century is grievously hindered by a historical tragedy, the destruction of most manuscripts of English sacred music during the religious upheavals of the 16th and 17th centuries. The Reformation regarded the florid music of late medieval Catholicism with disdain, if not outright hostility, and much was lost or deliberately destroyed by zealots. Fewer than ten significant sources survive from the period 1500-1547, much less than one might have found in just one well-stocked church music library at the time. The Peterhouse partbooks are the largest extant source and contain nearly 50 pieces not found complete anywhere else. Despite the enormous importance of this source to music history and the extremely high quality of much of the music contained in it, it has received short shrift from performers and musicologists alike owing to the fact that the tenor partbook, along with a portion of the treble, has been missing for centuries. This has prevented singers from performing the fifty pieces in the partbooks that survive complete in no other source—until recently, that is. Blue Heron’s performances of the incomplete Peterhouse music rely on reconstructions by the English musicologist Nick Sandon, who has devoted his career to restoring this repertoire to its rightfully prominent place.

The CD booklet includes extensive notes by Scott Metcalfe on the Peterhouse partbooks, the music by the anonymous composer of the Mass, Sturmy, Mason, and Hunt, and on the performance practice of music from the period. A detailed account by Nick Sandon of the Peterhouse partbooks, their place in history, and the process of restoring the missing music, may be found in the notes to the Volume 1 of the series, Hugh Aston: Three Marian Antiphons (BHCD 1002); the notes may also be read online or downloaded at Blue Heron’s website (www.blueheron.org), where you will also find links to more information on the project, including recorded interviews with Nick Sandon and Scott Metcalfe.

Winner of the 2018 Gramophone Classical Music Award for Early Music (the first non-European group to win the award), Blue Heron (Scott Metcalfe, dir.) has been acclaimed by The Boston Globe as “one of the Boston music community’s indispensables” and hailed by Alex Ross in The New Yorker for the “expressive intensity” of its interpretations. ... more

Bandcamp Daily  your guide to the world of Bandcamp